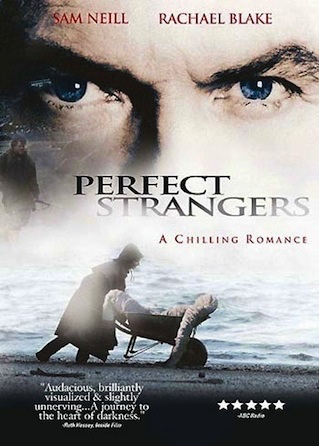 When Melanie (Rachael Blake) goes home from the pub with the best looking man in the room (Sam Neill), she is captivated by his charm and attentiveness. He sails her away to his “castle” – a rundown shack on a deserted island.  But as passion becomes obsession and romance turns to rage, Melanie realises that she has been kidnapped. Torn between fear and desire, Melanie must escape - but her ardent admirer has other plans.

Gaylene Preston is the writer, director and producer of Perfect Strangers.  Her award winning features include Mr Wrong (1984), Ruby and Rata, Bread & Roses and WAR STORIES Our Mothers Never Told Us, which had its European premiere in official selection at the 1995 Venice Film Festival.  She has produced several documentaries including the award-winning feature, Punitive Damage and Coffee, Tea and Me? With Perfect Strangers she returns to her roots as a genre filmmaker, delivering a perversely chilling romance.